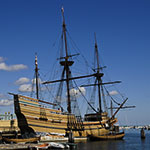 Historic Homes and Sites in Cape Cod & the Islands 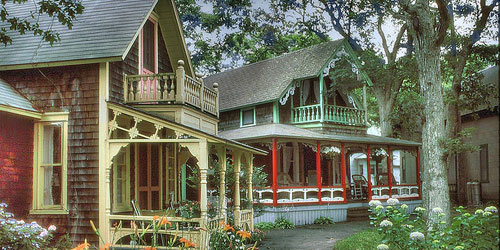 In the Center of Oaks Bluffs is a colony of about 300 perfectly preserved examples of Carpenter Gothic style "gingerbread" cottages dating from the mid-1800s. The colorful little homes, owned and occupied by families over generations, are the living continuation of the Martha's Vineyard Camp Meeting Association, rooted in the 1830s Wesleyan revival movement. The still-dynamic Tabernacle stands at the center of this network of fairytale-like houses.

The church was built in 1843. With its dramatic front columns and majestic steeple, it's an excellent example of Greek Revival architecture. The church is now a community performing arts center and has many special events scheduled throughout the year. Call the church or consult the local papers for a schedule of events.
Information: http://bit.ly/14SY9zx

This 1844 building was the site of a school that offered early courses in navigation. Maritime and Native American artifacts are featured, as are displays of antique glass, photographs, toys, and clothing. Collection includes Charles D. Cahoon paintings, Crowell carved birds, a large cranberry culture exhibit, historic photographs.
Hours: Open late June through mid-October; tours Wednesday through Friday, and at other times by appointment.
Admission: Adults, $3.

This museum is the re-creation of the 1874 life guard station originally at this site.
Hours: Late May to Columbus Day, daily, 10 a.m.-5 p.m.
Admission: Adults, $5; youth age 5-18, $3.
Information: www.nantucketshipwreck.org.

The original part of this Greek Revival sea captain's house was built in 1740. The kitchen has its original brick beehive oven and butter churn, along with acollection of china, pewter, maritime artifacts, and clothing from the sea captain era. The 50 acre property has nature trails.
Hours: June 1 through October 15, Thursday-Sunday, with tours at 1, 2 and 3 p.m.
Admission: Adults, $3.

Thirty-five acres of brightly painted cottage dating back to mid 1800s; tour a gingerbread home; performances at the tabernacle. Visitors to the Cottage Museum can view the interior of a typical Campground cottage, complete with period furnishings of the 1800s. Also on display are vintage photographs and other documents relating to the history of the Campground.
Hours: Summer months, Monday through Saturday, 10 a.m.-4 p.m.; Sunday, 1-4 p.m.
Admission: Adults, $2; children age 3-12, 50 cents.
Information: www.mvcma.org/museum.htm

This outdoor, oceanside monument, erected in the popular Kennedy retreat on Cape Cod, memorializes the fallen President. There is no admission fee.

The Captain Jonathan Parker House, built in 1824, was home to a local schooner captains who made his trade in fishing and transportation up and down the seacoast. The property contains historical maps, 18th- and 19th-century furniture, art, ceramics, and a 19th-century ornamental garden.
Hours: Late May to mid-September, Thursdays through Saturdays, 10 a.m. to 2 p.m. Private tours by appointment.
Admission: Free.
Information: www.ostervillemuseum.org.

The Museum of African American History on Nantucket features two historic sites, the African Meeting House and the Florence Higginbotham House. These buildings were at the center of a thriving 19th-century African American community on the island.
The African Meeting House on Nantucket is the island’s most vivid reminder of a thriving 19th-century African American community. Erected in the 1820s by the African Baptist Society, it was a church, a school for African children, and a meeting house.
The Seneca Boston-Florence Higginbotham House was built in 1774 by Seneca Boston, a weaver and formerly enslaved man whose family maintained the house until 1918. The property was owned by African-Americans for the next two centuries.
Hours: July to October, Monday to Friday, 11 a.m.-3 p.m.; Saturday, 11 a.m.-1 p.m.; Sunday, 1-3 p.m.
Admission: General, $5; seniors over age 61 and youth age 13-17, $3.
Information: www.afroammuseum.org/afmnantucket.htm

Constructed in 1838 as a Friends school, the Quaker Meeting House provides an appropriate setting for presenting the story of Quakerism as a dominant social and economic force on Nantucket. Interpretive presentations are regularly scheduled.
Hours: Open April through October; call ahead for hours.
Information: www.nha.org/sites/quakermeetinghouse.html

Built in 1752, the house has a gambrel roof, wide floor planks. and a beehive oven. Of particular note is the Durang Wing collection of seashells from around the world. An herb garden and the equipment from the old Chatham Light are on the grounds.
Hours: June 8-October 8; hours vary within seasons; call ahead
Admission: Adults, $6; students age 8-18, $3; children age 7 and younger, free.

Explore a colonial Cape Cod house with a 20th-century flavor. In 1936, the house was moved down Old King’s Highway to its present location. The house was taken apart beam by beam and reassembled. Today it contains significant collection of antique furniture, hooked rugs, ceramics, and pewter.
June 1-October 15; second and fourth Saturdays; 11 a.m.-5 p.m.
Admission is charged.

Martha's Vineyard is home to the oldest working carousel in the U.S. The wooden horses have real stirrups.
Hours: Open during the summer months, into October.
Admission: $2 a ride
Information: http://bit.ly/nM8ChU

This Christiantown memorial is the site of an Indian burial ground and the Mayhew Chapel, named after Thomas Mayhew Jr., a missionary. This site is owned by the Wampanoag Tribe. Includes a wildflower sanctuary.
Hours: Open year-round.

This site is maintained by the Nantucket Historical Association. Exhibits feature stocks and other equipment. It was the first prison in the U.S. to allow prisoners to go home at night.
Hours: May 25–October 14, daily, 11 a.m.–4 p.m.
Admission: Adults, $6; youth age 6-17, $3.
Information: www.nha.org/sites/oldgaol.html.

Famous for its steeple clock, which, according to legend, is the only clock in the world that strikes ship's time. The interior of this 1850 Greek Revival building is stunning, with pale blue walls, a brass chandelier hanging from a gilt ceiling rosette, and curved pews forming an amphitheater. Sunday evening concerts are held here throughout the summer.
Information: www.wellfleetchurch.org.

The Eastham Windmill is the oldest and last working gristmill on Cape Cod. A visit to the windmill gilves guests a snapshot of the Cape life in the 1700s. It is listed in the National Register of Historic Places. An annual celebration called Windmill Weekend takes place here the weekend after Labor Day. The fest includes music, food, crafts booths, a cookout, a pancake breakfast, a road race and a parade, and much more.
Hours: Summer, Monday-Saturday, 10 a.m.-5 p.m.; Sunday, 1-5 p.m.

The Highland House Museum is located in the former Highland House, a hotel built on the Highlands in 1907. Also near the Highland Lighthouse in North Truro, it is a classic example of a turn-of-the-century summer resort hotel. The museum displays artifacts and information about early European settlers and the Native Americans that preceded them.
Hours: June 1 to September 30, Monday to Saturday, 10 a.m.-4:30 p.m.
Information: www.trurohistorical.org/intro.html